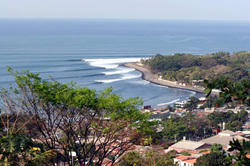 The Puerto de La Libertad was founded in 1927 and it is the first port of El Salvador, back in the 50’s it was an international tourist destination; its major attractive was Punta Roca’s wave, back in the days was know as the Latin American J Bay, it was visited mostly by nomad surfers that adventure themselves looking for perfect waves here in the south..The port and its infrastructure was damaged back in the civil war last decade; and now, with the help of the government, the municipal table and different people interested in the tourist development of this part of La Libertad it forms part of an ambitious project which is now a few steps of being totally reconstruct.

La Libertad is located in the department of La Libertad, only 34 km from San Salvador. This port city offers touristic infrastructure: small hotels and restaurants, as well as some recently built fancier hotels.